Trending
You are at:Home»Blog»Portrait of a Garden

Somewhere between the hill of Tara and the hill of Skryne is a garden like no other. In it stands an old house where generations of Wilkinsons have lived, and Jock and Mary have brought up their three sons Nigel, Neville and Harry, now adults, there. They are a generous and sociable couple who love gardens. In 1975 local friends Jim and Jill Mc Aleese started up a group of like-minded garden enthusiasts, which includes the Wilkinsons, called the ‘Dig It and Dung It’ which became a vehicle for enjoying  one another’s gardens in a sociable way, and for garden visits throughout Ireland and England. In 1981 the group visited Highgrove, and later gardens in Sussex and Yorkshire. Among their number is Jim Reynolds, whose iconic Butterstream garden in Trim has now passed into legend.

Many people have a dream of a garden but only the hard-working achieve their ideal. Jock is one of these; by applying himself over long decades everything about his garden attests to his consistency of effort, aptitude for nurture, and patience. In it he grows a wide variety of different vegetables in quantity using traditional methods, which are now called organic, reminding us that once before chemical fertilisers, herbicides and pesticides, that was the only way there was of nurturing garden crops.

The Wikinsons’ garden is local, sustainable, organic, light on or free of pesticides and artificial fertiliser – the sort of gardening that is much easier to write and talk about than actually practice. Given our planets’ changing climate patterns, organic gardening chimes with a contemporary horticultural ideal few enough of us can live up to. Jock Wilkinson is one of the exceptional few. He has always used traditional time-honoured, sustainable methods in the cultivation of his extensive garden.

Because of its size and the variety of vegetables, fruit, flowers shrubs and hedges grown there, by the standards of the past Jock’s garden would have been the work of a head- gardener and several helpers. By the standards of the present it would seem to be an impossible undertaking, time-hungry and labour intensive. Yet Jock has always done the work all by himself, preparing the soil, sowing, tending the emerging seedlings, weeding, thinning out, watering, staking and so on as the growing season slowly morphs, via challenges and dangers, into harvest time. Maintenance of lawns, pruning hedges and shrubs and making compost is another layer of activity. Since retiring from dairying some years ago the garden has been Jock’s daily work, whatever the season. Keeping it all going has been a large part of the texture and content of his life, shaping his hours and days, seasons and years.

Whatever the season, the garden’s combination of the natural and the cultivated, of the devised and the random are most satisfying to the eye. But in spring it is most atmospheric. The chrome-yellow of daffodils glint, the air is scented as the buds burst, a blackbird provides the soundtrack. A huge weeping ash is encircled by bluebells; during lengthening April evenings this is one of the great sights of the county. The bright flowers and lush foliage of summer cannot but inspire, and the long rows of salad and vegetables are rarely if ever seen nowadays in a private garden in such profusion. When the great day of the summer holidays finally arrived at their granddaughters’ school, the garden became the happy scene of a strawberry feast for all the girls’ classmates when they were in primary school. Often Mary has an open-day during the summer to raise funds for MS Ireland, and once to raise funds for the restoration of Navan church tower. Last year Mary generously hosted the garden enthusiasts of Herbert’s Touring Group, and Galway Flower and Garden Club. When autumn comes there are apples in quantity. A small boxwood cloister plays  the evergreen card throughout the winter and piles of logs for fires are ready in the porch for the ice-cold evenings of January when snowdrops appear, as though by sorcery, under the magnificent trees.

Jock has a large area under cultivation, and his vegetables have the greater part of this Eden to themselves; another large section is devoted to summer fruits. There are flowers and an orchard. Surrounding all this are mature statuesque trees which give the place the private, even secret air visitors sense while viewing the ordered drills of potatoes, brassica, onion, beans, peas  – a whole cornucopia of Jock’s making. I often think that this is what Ireland looked like once, with stretches and patchworks of gardens around houses, before jet-planes brought our fruit and chilled containers our vegetables from afar, when almost everybody, whatever their means, had usually to grow some part of what came under their knife and fork. 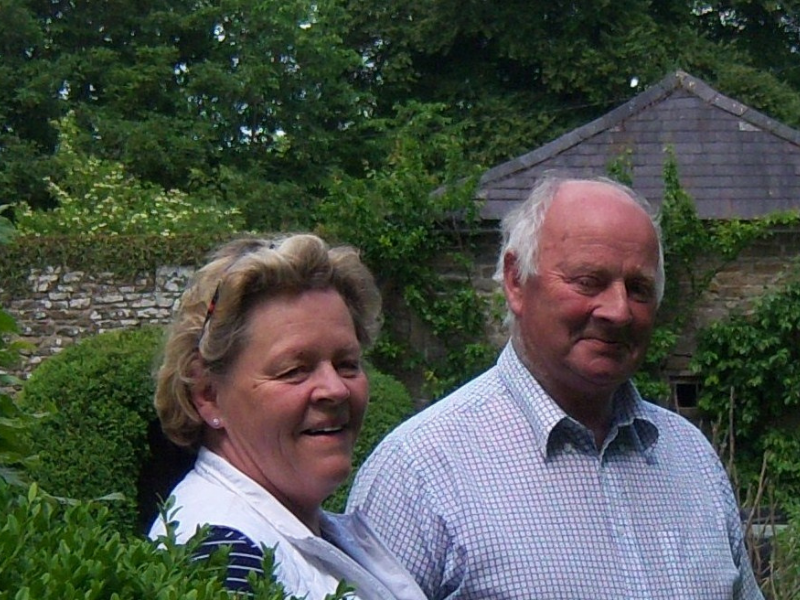 Mary reminisces about how Jock, as well as being a farmer, came to be a gardener as well in 1975. His original plot has since then grown to be the expansive and complete magnum opus it is today which family and friends regard as the true spirit of the place. And there have been other gardens there too, in the past. Jock remembers that in his youth there being a trial garden for Sam McGready roses (before the eminent rose-breeder relocated from Northern Ireland to New Zealand) and that his father had a small garden there as well.  In making his own garden, the traces and ley lines of even older usage emerged, most notably as a pile of quartz crystal stones – probably the remnants of a rockery from Victorian times- some of which have been reused as a decorative border around  the greenhouse door. Fine specimen trees planted long ago linger elegantly amongst familiar varieties, such as a golden oak (quercus protobalanus) native to North America. A large fig tree is another still-in-existence piece of the past. Despite the wet and cold of the Meath winter, it provides surprising amounts of figs, thanks to its privileged position beside a sunny wall.  It’s a lesson for other gardeners to give fig trees a go, in sheltered sites across the country.

Baronstown is picturesque in name and nature and there is plenty of birdlife in the garden. In summer, swallows and swifts fly high in swooping curlicues. The blackbird in return for its liquid music takes a forfeit; a strawberry here, a raspberry there, the ripe side of an early apple. A robin calmly waits as Jock digs out the potato trenches to snatch a worm or beetle. Now in his eighties, he remembers when owls were not an uncommon sight and sound in the surrounding area. He also recalls that a barn on his farm was used as a dance hall in those vanished times when cars were rare and this country place was a long bicycle ride to local towns. The smooth oak floor, on which grain had originally been stored was ideal for dancing on. 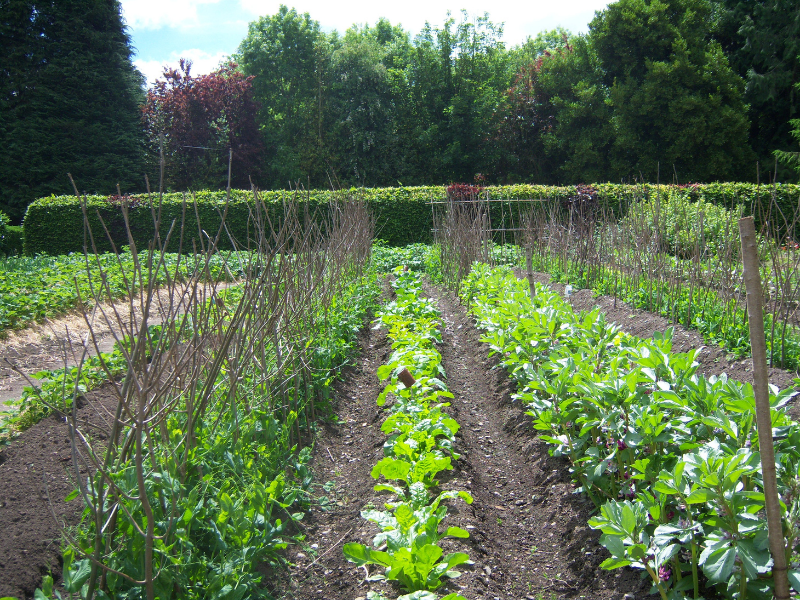 Outside the garden wall on the roadside Jock has planted a wide stripe of ground with ferns. In the recent past, where his apple-trees now stand, he had nursery beds of beech, grown from fallen beech-mast. It was from this stock of home-grown beech that James McConnell sourced the saplings that he used in planting his own Beech Garden near Navan.  This is sensible husbanding of resources, and local and sustainable action, that more Irish gardeners need to emulate if the convenient but unnecessary globalisation of plant production, with the inherent destructiveness to the environment of air-miles, is ever to be curtailed.

Before her marriage Mary studied at the College of Art, Dublin, now NCAD. As well as painting, sculpture and drawing she studied with the inspirational Lillias Mitchell, the doyenne of craft weaving in Ireland. As the garden developed and filled up with flowers, Mary honed her skills of flower arranging and floral design. Mary draws inspiration from the borders and shrubberies of the garden, her hand light, her eye attuned to the natural character and stance of all that grows there. Not for her the stiff contrivances of floral art competition rules; elegant but never contrived, Mary’s arrangements charm us by channelling the inherent grace and subtle energy of natural growth. Her work in flower design is in much demand. Whether on altar or side-table, colour use and apt association of form and texture in her arrangements invariably raise the spirits.

Last year, Mary worked with her grand-daughters to paint Matisse-like leaf designs on the gable-end of the greenhouse. Boldly stated and modern, this foliate motif in black is a reminder that the present generation link hands with past incumbents as they add something new. But throughout the generations that have lived here, full and plenty has emerged through work and care from the rich soil. Jock’s well-organised routine ensures a succession of fresh, peak-condition vegetables in season and Mary brings these to the dining table in delicious forms and guises. Fine fruit becomes delectable desserts under her hand. In all this Mary and Jock are complimentary, the ying and yang of house and garden. What can be preserved ends up in the freezer, beans are dried, and skeins of onions hang from the conservatory ceiling. Jock was pleased several years ago to be told of a technique for producing perfectly clear apple juice. Plenty of fruit and vegetables are surplus, with which friends and family are open-handedly supplied. 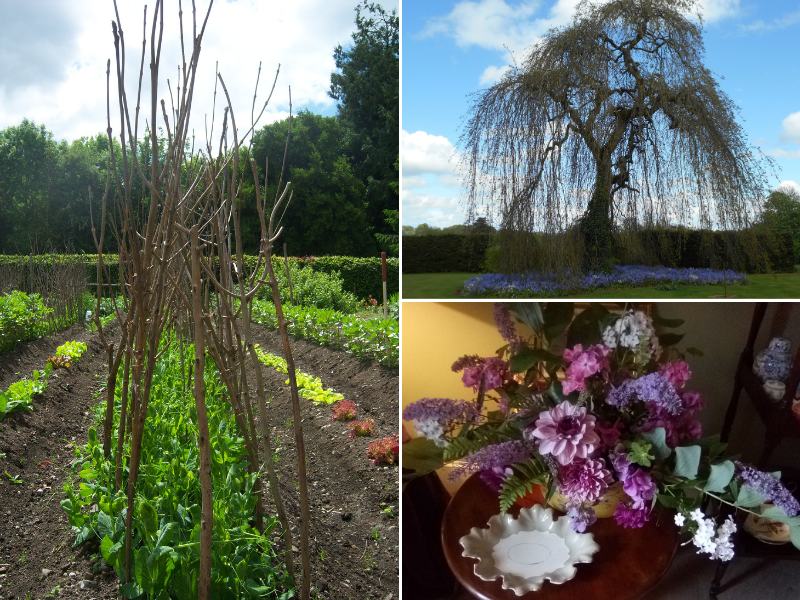 The best of home-made compost and richest of leaf mould combine with elbow-grease and total dedication to the success of the year‘s gardening.  But it is in the mind and heart of the gardener that the success of the whole enterprise really depends – the will do it, the knowledge to make it all happen as and where and when it should, and the intuition to press on regardless in that essential collaboration with unpredictable Nature’s ways and wiles. In all of this, Jock Wilkinson is the gardeners’ gardener.