Trending
You are at:Home»Blog»Home of the Year Episode 6

This week Hugh, Amanda and Suzie visit a dormer house in Cork, a restored schoolhouse in Co. Down and modern home in Co. Galway. 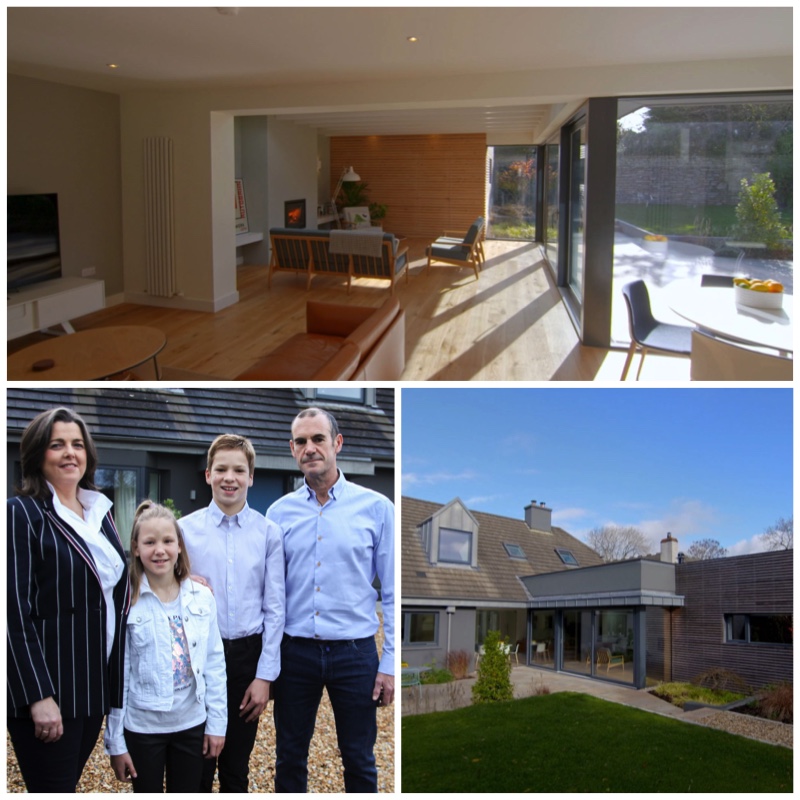 Norma and Stephen Barrett bought a site in Cork in 1993 and built a dormer house. In 2017, they decided after twenty-four years to modernise the house. Stephen who is an engineer and Norma who works in computer science worked closely with Cook architects to design the house and they also helped with the decorating. They have used modern architectural methods such as zinc cladding, the windows have been cleverly planned to bring in as much light and the house has clever detail throughout. Their family and friends think that it is an amazing transformation of an ordinary dormer bungalow to a modern, bright, spacious and comfortable house. They are very proud of what they all achieved; they love the new open plan space so much, the outside garden and living space feels like one. Norma especially loves clutter free homes and this style provided that beautifully. It is very relaxing home for them and their two children and easy to keep clutter-free.

Hugh felt that this was an inspiring renovation and liked the attention to detail from the timber cladding to the colour choices, scoring it a 9. Amanda felt this was a great example of how to furnish an existing house but was really let down by the kitchen scoring this home an 8. Suzie also scored this home an 8 and felt that it was a spacious and atmospheric home filled with colour and texture, but like Amanda felt that the kitchen lacked the same design consistency and functionality that existed elsewhere in the house. That’s a total score of 25! 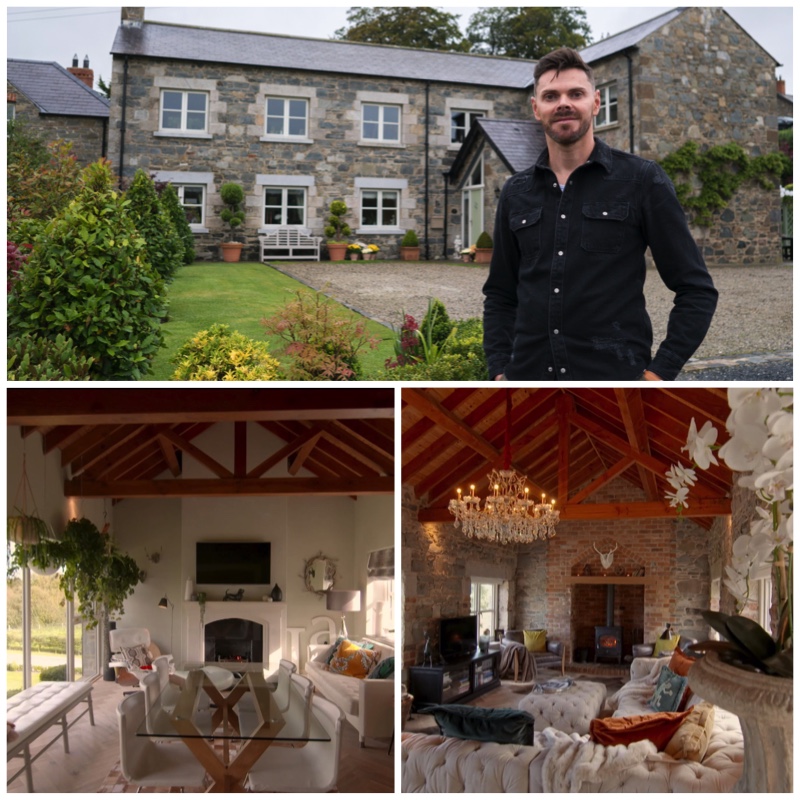 Richard Rodgers lives in a restored 1800s schoolhouse in Co. Down. The house which was part of an old mill, had been in abandoned state for many years when Richard came across it. All the properties that were part of the mill development had been bought by a local builder in 2006 and each one was to be restored and brought back to life, however the financial crash meant ‘The School House ‘and a neighbouring property remained unfinished and unsold. In 2013, Richard accidently discovered the schoolhouse and after making enquiries and meeting with the builder he purchased his home.  It was originally a boy’s school. Richard is a retail interior designer who decorated his home himself, from choosing the kitchens and bathrooms, furniture selections and all soft furnishings to even tiling bathroom floors himself. He wanted to be sympathetic to the age of the building, but also felt it had to reflect the modern age, while incorporating family antiques with modern Italian furniture, making it the finished home that it is today.

Hugh felt this home offered a fun interior but that the amount of objects on display confused the integrity of this design style scoring this home a 7. Suzie gave the home an 8 and found herself constantly guessing what she would find around every corner and while it wouldn’t be her style and aesthetic, she did appreciate the homeowners bravery in his design choices. Amanda would have preferred to see more restraint in the décor of this home and gave it a 6. The overall score being 21. 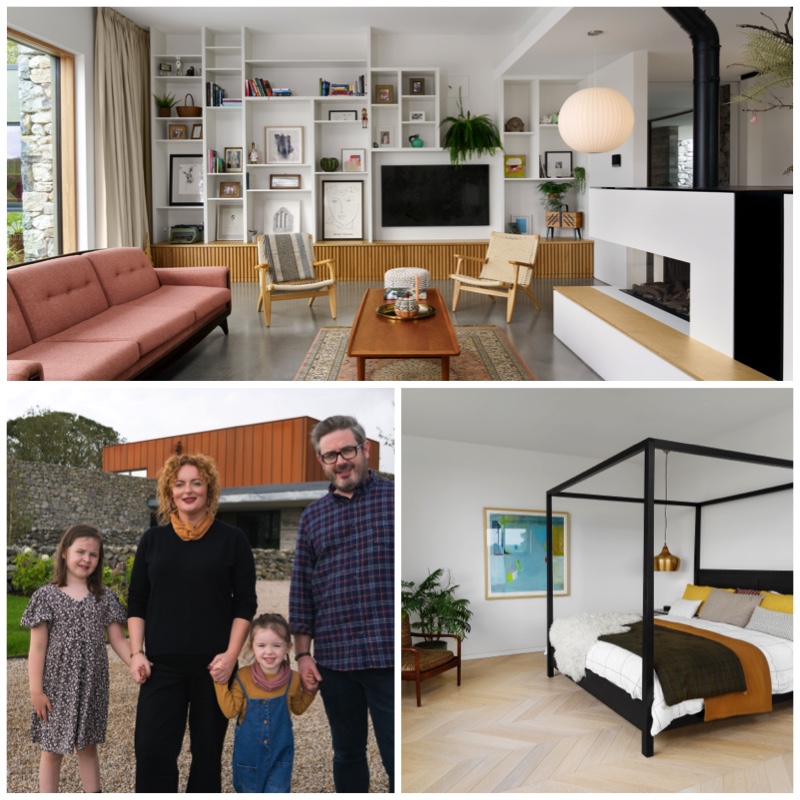 Tanya Lee Conroy and Noel Conroy live with their two daughters in a modernist home in Co. Galway. The house is built on Tanya’s parents’ land and where her Grandmother’s cottage used to be. Tanya and Noel were involved in every design detail of the home. They both work in a commercial property development company and project managed their self-build themselves. The design process started in 2015 with their architects, they broke ground in March 2018 and completed the it in December 2019. The house has a timber frame and a flat roof rubber membrane. The materials they used are materials you would expect to see in the West of Ireland; dry field stone in keeping with the Connaught landscape, and a Corten steel hat which is typical of rusted roofs you see in a traditional farmyard.  They both have a passion for mid-century design and good craftmanship. They have a lot of bespoke furniture and they wanted their home to be bespoke to their family. They describe their style as a mix of mid-century and modern design. Tanya’s dad did a lot of work in the house and built their 6.5-metre-tall board mark concrete wall that is an important feature in their home. Tanya and Noel say that their home is one hundred percent them as they were involved in every detail.

While some of the light fittings and the finish of the flat roof outside the bedroom could have been more considered for Amanda, she did say building a house like this is a huge achievement and loved the entrance hall scoring the house an 8. Both Hugh and Suzie gave it a 9, with Suzie feeling that this was a exceptional contemporary home and Hugh admitting how the use of materials unified the outside and inside of the house and acted as the perfect backdrop to the collection of retro furniture. Overall the home scored 26 and won a place in the final!